The Sava Bohinjka River is formed at the outflow from Bohinj Lake where the so-called Jezernica combined with the Mostnica River creates a clean, pure and fast Alpine river. On its 32-kilometre long journey through meadows and gorges formed by a glacier, the river has a 120-meter slope providing it with the sufficient amount of oxygen to sustain a large population of Salmonidae. 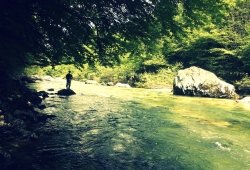 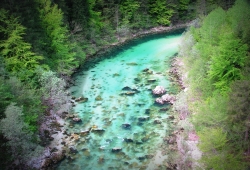 Numerous clear streams which flow into the Sava Bohinjka contribute to the size of the river in its lower section and thus provide it with vast amounts of food, which support a large number of fish. And it is this lower, 17-kilometre long district of the Sava Bohinjka that is being managed by Fishing Club Bled. The district begins at the hydroelectric power plant in the gorge near the village of Obrne, where after several kilometres of fast flowing through the marvellous gorge, the river slowly calms down as it approaches the valley. Initial fast and deep pools are replaced by rapids and overflows into longer pools, which offer various spots for the most finical fly fishermen.

The Sava Bohinjka is renowned in the world as the river on which dry fly fishing lasts over the entire season and which can also be implemented at a somewhat higher water level.
The fishing season begins on 1 April and ends on 14 November. Fly fishing and fishing with the use of barbless hook are permitted exclusively in the district of Fishing Club Bled; with the exception of Danube salmon fishing in the winter season (between 15 November and 14 February), when spin fishing is also permitted.

The following species of fish can be found in the Sava Bohinjka:

Fishing rules:
Fishing is allowed with a fly rod and 1 artificial fly. Either fly, nymph or streamer must not be longer than 5 cm. Barbless hooks only. Fishing is allowed from dawn till dusk. A bite indicator is allowed. Weights in addition to fly line weight, such as split shot and lead weights, prohibited. Fishing from bridges, boats and belly boats is not allowed. Fishing permit without clearly marked date of fly fishing is invalid. Incomplete fishing licence is invalid. You are respectfully requested not to cause any damage to properrty or bank along the river. Do not leave litter. Please park your vehicle in a suitable place. 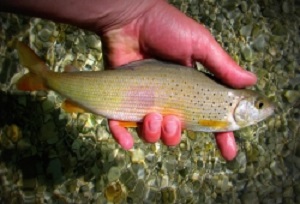 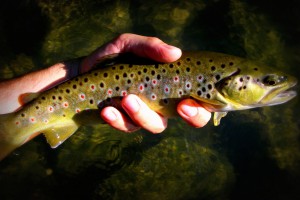