We have opened also a Trophy zone that is also C&R rule. Most of the fish in the Trophy zone are very large trouts of marbles (the marmoratus of trutta), the hybrids and the graylings. The zone named Trophy is located between town Sp. Idrija and town Idrija in length of about 5 km. 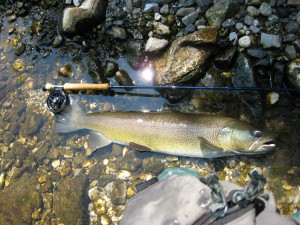 The marble trout has all the features of trout species. Adult fish has an elongated, cylindrical body with a large head and powerful root of the tail fin. Oral slot extends beyond the eyes in the oral hollow are strong teeth. The caudal fin is slightly nicked. After the body is marbled in two basic colors: bright – yellow to gray and darker – brown to olive. Throughout the body above the lateral line from the beginning of the tail fin to the head greyish brown spots that combine the meandering lines, interrupted by bright, silver-gray winding lines. This interweaving gives typical marble pattern, like no other fish species in the country. Sometimes on the flanks is detected slightly copper or pink color, extending for the entire length of the hull. Marbling can also be observed in the gill flaps. The characteristic of pure marble trout Idrijca type is that the red color also appears in the form of dots and spots, which are present throughout the line Lateral line and also at the sides. In the area between the back fin and dorsal fin are tiny red spots outside Lateral line. Very often, the dots are present on the dorsal fin and upper and lower edge of the tail fin. Today, many fishermen considered (erroneously) marble trout and marbled trout without red pigmentation (pixels) which in the case of the marble trout type Idrijca completely wrong.

The marble is placed on top fish of varying size, depending on its habitat and food. In the upper parts of the water barely grow to a length of 30 cm or perhaps slightly higher, while in the lower parts of water with lots of deep pools and plenty of food, reaches a length of over one meter.

The marble placed on top, like other species of trout feed on food of animal origin. For smaller instances, the proportion of air food important, while larger fish are cannibals and eat other fish.

The marble trout spawns in late autumn or winter. In our waters, spawning begins in late November and December. I prefer to spawn at night near his environment, but the ball in the tributaries. In good conditions marble trout reaches sexual maturity at the age of three. Fertility marble trout is a relatively small number of eggs ranging from 1100 to 2200 per kilogram of body weight.

However, as the marble trout easily cross the brook trout can be found in our waters also crosswords. Ardi intensive care for the clean marble trout type Idrijca became brown trout undesirable and is not investing in the water.

Marble trout on streamers fished most successful in the early morning hours, as well as small dry flies. The marble trout for most fishermen fish is highly desirable, but it is quite difficult to catch. He is very cautious and hunting it is necessary to use a different technique than hunting rainbow trout or grayling. Most of the day preždi hidden in pools under the roots, stones … From his days hiding is displayed at dusk, when preparing for the hunt. In particular, larger specimens are predatory.

Idrija Fishing Association recommends a system of fishing catch and release. Photographing or filming is permitted without excessive exposure to fish caught. 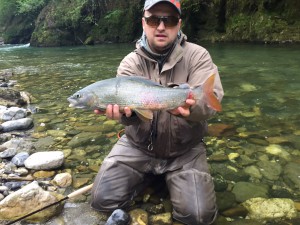 The growth of grayling depend on the structure of the habitat and living conditions in it. In some growth in the first year of 8-12 cm in the second year 17 and even up to 28 cm. In the third year of its size can already reach 35 cm. The growth of grayling is most intense from spring to autumn, while in winter slows down.

Fry for stays in quiet areas of coastal waters to a depth of 40 cm, it is also the most common prey fish-eating birds such as gray heron and cormorant. Adults and grayling inhabit the central part of the river a few meters deep. Choose to set a favorable area to defend it from other grayling that invade their territory. We like to have shaded the shore with lots of vegetation, which extends far above the water.

For natural existence grayling are very important spawning grounds. Spawning grounds in the shallow parts of the river, the depth of 15 to 50 cm. At the bottom is mostly sand and a few larger stones. Pubescence grayling depends on the climate. In our river this happens in the second year of life. Spawning lasts from March to May. On Idrijca fishing season for grayling begins on May 15.

Angling highly recommended fishing in a manner “catch and release”

Brown trout are very popular for fly fishing. The river Idrijci brook trout is a native, but by investing in water because of fishing. Since the concern for indigenous marble trout become the predominant brown trout become undesirable.

I like to have a dynamic channel, pools, undermines its banks, roots and larger rocks in the water. Form trout is mainly dependent on the environment in which they live. Its size and shape depend on the habitat, the size of its habitat, the amount of food and reaches a height of 80 cm. The arrangement of dots and spots at each drugčna placed on top, and some have freckles and spots and small numbers, while others large and maloštevilčne.Na general, the trout on the back brownish or blackish, the hips and belly orange-yellow to whitish. Nevertheless, the color of the skin adapts to the environment so that it is difficult to spot in the water.

Trout is a very shy fish, and if you frighten panic and flee shied at the other nearby fish. Its environment is cold, clear water. Optimal temperature of the water is between 6 and 18 degrees Celsius.

Brown trout are usually spawns in November. Depending on weather conditions, the spawning can be quite extended, or only lasts about a week. If the bottom of the pebble can be seen everywhere spawning stock wells, where the females deposited eggs. The female in drstno hole postpone eggs, the largest male skrbo but watch out for the female and when the eggs are fertilized by the female lavished with fine sand. Gilts have a youthful lines, which extend transversely across the hips. Reach sexual maturity at different ages depending on the water, sometimes after only one year, but sometimes only in the second or third year of age.

The fishing season begins in April, when he could still very cold and the snow melting in the mountains the water is slightly higher. In such an environment, fishing is more successful with streamer and nymph. In the second half of May and June but come to light, dry flies, especially in warm and cloudy weather. In the meantime, a successful fishing throughout the day in the hot summer days, the performance is limited to the evening jump, which can last only an hour or even less.

At the end of the 19th century, rainbow trout, Californian trout, was brought into our water. Today, the rainbow is widespread insertion in Europe and also in our country. A feature of rainbow trout is that it can live in a more dirty and hot water. The length can grow up to 60 cm. The shape of the head and torso slightly reminiscent of brown trout. The color of the body to some extent adapts to the environment, and may be dark or very bright. The back is darker gray to greenish brown, hips brighter, but terebuh light gray to whitish. Along Lateral line running from head to tail red line, which becomes more pronounced when it spawns. Around the hull and fin has black freckles.

Sexually mature in the second to third year of age. In nature spawns from February to April, the farms are already in December or even earlier. The female lays 1600 – 2000 eggs per kilogram of body weight.

It feeds like other trout water invertebrates, insects that fly in the water and with larger or smaller fish. When we inhabit the same waters as brook trout. For the population we fishermen because it invests in the fishing waters. Due to the rapid growth of cultivated in farms across Slovenia. It is sutiable for sport fishing because is greedy and grasping at any time of day, not picky about bait and sung offers strong resistance.